Mobile the final frontier.  These are the voyages of mobile learning.  To seek out new devices. To boldly go where no e-learning vendor has gone before, specifically LMS vendors who are now starting to get it.

To, ah forget it you now the rest, but what you may not know is the latest on the mobile learning front.

I already saw that mobile planet

Responsive – Talk to any LMS vendor (okay, a large swath of them) and they will tell you they have responsive for mobile.

For those who do not know what responsive is – basically the courses, LMS, etc. will conform automatically to the device’s screen size.  A vendor can do this without having a native app.  Vendors seem enthralled to show this to folks, even if you tell them you know what it is.

M-Learning supported.   Another ho-hum feature that every system can do.  If they are in the cloud, surprise (actually not) you can view them in your mobile web browser.

Even if it is on-premise, and you can going through your browser to access it, if you can see it, then it supports mobile learning.

Native apps. On the rise and as previously noted it does not mean that the app is self-contained, rather it means that they have an app to access their system.

Mobile Devices with marketing.  Go take a vendor web site and specifically look for their mobile learning stuff.  More often than not, they show it with a smartphone.

Who is taking a course or would want to on a smartphone?  The exceptions for right now are due to infrastructure, location (many countries in Africa and a few other countries/locales, but that is slowly changing), and some additional variables.

In the last two years, I have found only one person (in Australia) who said they take courses on a smartphone (I often ask my audiences).  One person.

I’ve never been to this mobile solar system 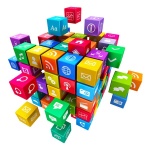 On/Off synch.  You want this and if the vendor doesn’t have it, tell them you want it.  For those who do not know what on/off synch, basically the learner is taking a course/assessment/whatever and loses internet connectivity.

When they get it (net connectivity) the data automatically pushes back to the LMS.

Some vendors still think that most people have 3G or 4G and thus there is no reason for it.  Mobile device data shows otherwise.  More people are purchasing tablets that are Wi-Fi only over 3G/4G.

Also, have any of these vendors seen the price of data for accessing sites?  I can’t speak for others, but there are places in my house that the net connection is poor than others.  And my home connection is 50mbs.

xAPI.  In the foreseeable future, a necessity for mobile learning.  I don’t say for long term future, because I do believe that somewhere down the infinite world of compliance standards, something new will appear.

Despite what you may have heard it is still a work in progress.  This would explain why some vendors are hesitant to jump right in. For a in-depth explanation of what xAPI is, please read my earlier post.

Mobile OS.  You might be shocked to learn (I know I was) that there are vendors out there whose native app does not support the latest mobile OS for your device.  I have found vendors who have told me for example, that they support up to iOS 7.1 or Android 4.0 and nothing further.

Courses specifically for a mobile device.  For me, this will be a major game changer and honestly, I as a mobile learning purist (there is such a thing), elated.  What it does and why you will want it:

However, if you dive further in, you will find that yeah it looks good on a mobile device, but it also looks the same and good via your desktop or laptop browser.  Hence, it is really isn’t pure mobile course appearance.

Instructor/Manager capabilities/views within an app.  Starting to appear more than not.  Still in the low stages.  Watch out as some vendors will pitch this, but again it is via the mobile web browser, so really it is a spin, rather than true reality.

For those who have on/off synch, having an instructor/manager views and capabilities is a must.

I mean if you are doing F2F (ILT) wouldn’t it be awesome for that person to be able to do things even offline and then synch up to push out?

If you are on the floor verifying that the person is successful or not at completing their tasks, and many of us know that a warehouse or on the floor isn’t always net accessible, that the manager can still push the information at some point when they get back to their desk?

Down the road expect more capabilities and features specifically for native self-contained apps.  I hope it will include admin functionality.

Skinned app.  There are only a very small number of vendors who will skin/brand their native app to look like your corporate/organization/school etc. design.  This includes your name too.

IMC for example does this and I think it rocks.  I mean who wants to have their native app say the name of the LMS vendor? Especially if your system itself doesn’t have their name anywhere (by the way you want this).

If I am a LMS vendor I would have this capability, now rather than later.  The best way to get vendors to do it – is to request it.  Otherwise, many will sit there and do nothing.

Higher Education and mobile learning.  Simply put is stinks.  I just can’t understand why HE is so slow to maximize the possibilities with mobile learning, when the research data shows how many students use mobile devices.

Perhaps it is the research articles by academia folks who use theory or some funky angle on mobile learning (not all folks mind you, but I found plenty of articles that follow this approach).

Mobile Upload. Ability to take photos, shoot video, etc. and upload from the device right into your authoring tool or LMS.  Extremely rare with LMS vendors and rare with authoring tool vendors.  Seems to be a no-brainier for me, since sites such as Instagram and Vine are super hot in the consumer marketplace.

This is the latest as it relates to mobile learning. That said, there are a few others that I left out simply due to article post length – so as not to write War and Peace, the m-learning version.

Remember, just because you do not need it now, doesn’t mean you may not want it in the future.

So get a seat on the m-learning ship.

And trust me, it isn’t going to stall.

At least not on a tablet.