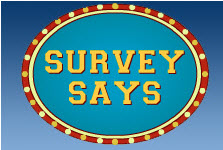 Hi, this is the ghost of Richard Dawson bringing you another exciting episode of Authoring Tools Survey.  We are in the final round and our contestant, Craig Weiss, will try to ascertain what the latest data from his recent survey means to the masses.

Before we jump into this game, let’s take a look at some key details.

We asked e-learning audiences around the world via the internet, what they were seeking in authoring tools. 507 people responded.  With each question, respondents could select as many as they wanted – since it was tied to feature sets.

Craig – are you ready to enter the final round of Authoring tools survey? “Yes, bring it on ghost of Richard Dawson.”

What features would you like to see in an authoring tool?  Respondents could answer, “Nice to have”, “Required”, “Not interested” and “Don’t Know”.

“Spirit of Richard, here are the answers” – we will now be switching to Craig’s data and his responses.  Please refrain from cheering, comments or clapping.

End users spoke loud and clear on what feature sets they want when it comes to authoring tools.  When I say want, I mean they see it as a must requirement.

Here are the top five feature sets that are required

Considering that the 41% of respondents had three or less years of experience in building online courses, I think it says a lot.  The days of just PowerPoint to Flash and simplicity are no longer cutting it.  When you toss in 19% who have four to six years, the numbers really come into play.

Most people would assume that the 50% of five or more years (26% who had more than 10 years) would be the drivers behind the need for layers, actions and triggers and I would partially agree. But the success of products such as dominKnow and Articulate Storyline are proving there is a demand beyond e-learning developers.

I also found the HTML5 numbers to fully back what I have been saying for the past year.  For those authoring tool vendors who still think this is just a passing fad or are using the wait and see approach – if this data doesn’t punch you in the gut to get moving – nothing will.

Just as people on the LMS side are seeking on/off synch than ever before, the ability to output to HTML5 is no longer a nice to have but a necessity.

Let me be clear, these folks are not saying just have the ability to see it in a browser, they are saying – we want to publish to tablets that support HTML5 – which numbers into the hundreds.

Spell checker seems like a no-brainer and yet it continues to be a feature that is lacking in a significant number of authoring tools. Why? Good question.

I guess they assume everyone knows how to spell cymotrichous (listed as the #1 hardest word to spell in the 2011 Scripps National Spelling Bee).   In case you are wondering what were a few others listed in “required” they are:

Under “Nice to have” the top were

What scored as the number one, “Not Interested” – Grammar checker with 23% and “Don’t Know” – PowerPoint add-in.  I’m not surprised about the “video editor” because video is all the rage.  Makes perfect sense.

Which of the following would you like to see in the next two years? (Select all that are applicable)

I found a couple of points quite interesting. The first was ADA 508 compliance which was nearly the lowest at 29%. The other was an advanced authoring tool for instructional designers and developers.

I fully agree with the need and have stated as such in the past – i.e. there is a huge demand in the marketplace for such a product.  Rather than focusing on a screen capture product as your next big thing – focus on this audience of folks.

Maybe I’m missing something here, but I constantly hear from e-learning developers at trade shows that there aren’t any products really geared toward them.

I’m not saying bring back Authorware – because, please don’t, rather I am saying push the “oomph” button to make the product robust and powerful enough with feature sets these people want.  If you are unsure how to do it – then crowdsource and find out.

And the winners are

The last question offered people the ability to select the authoring tools they were interested in winning in a drawing.  The drawing is on Friday and winners will be notified after that, with instructions on what to do next.

I want to thank the authoring tool vendors who provided a free license to their products (of which six of the top ten in Feb. rankings were included).  I think it says something when an authoring tool vendor on the list and even a few I asked separately, go out of their way and provide a license in such a giveaway, especially when licenses to many of these tools exceeds $1,200 dollars.

And now.. back to the ghost of Richard Dawson

Hey sports fans, I’m back. Sorry I won’t be kissing anyone, those days are long gone.  I want to thank you for reading in on the latest authoring tool survey data. It has been an exciting match.

Congrats to the potential winners in the authoring tool giveaway. I’m rooting for each and every one of you.